The Shining - Dinner & A Movie

Join us for an evening with Stanley Kubrick's "The Shining" on the big screen. 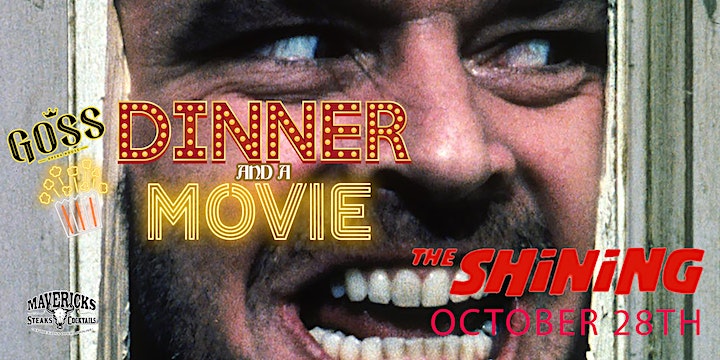 The Shining is a 1980 psychological horror film produced and directed by Stanley Kubrick and co-written with novelist Diane Johnson. The film is based on Stephen King's 1977 novel of the same name and stars Jack Nicholson, Shelley Duvall, Scatman Crothers, and Danny Lloyd.

The film's central character is Jack Torrance (Nicholson), an aspiring writer and recovering alcoholic who accepts a position as the off-season caretaker of the isolated historic Overlook Hotel in the Colorado Rockies, with his wife, Wendy Torrance (Duvall), and young son, Danny Torrance (Lloyd). Danny is gifted with "the shining", psychic abilities that enable him to see into the hotel's horrific past. After a winter storm leaves the Torrances snowbound, Jack's sanity deteriorates due to the influence of the supernatural forces that inhabit the hotel.

Production took place almost exclusively at EMI Elstree Studios, with sets based on real locations. Kubrick often worked with a small crew, which allowed him to do many takes, sometimes to the exhaustion of the actors and staff. The new Steadicam mount was used to shoot several scenes, giving the film an innovative and immersive look and feel. There has been much speculation about the meanings and actions in the film because of inconsistencies, ambiguities, symbolism, and differences from the book.

The film was released in the United States on May 23, 1980, and in the United Kingdom on October 2, 1980, by Warner Bros. There were several versions for theatrical releases, each of which was cut shorter than the one preceding it; about 27 minutes were cut in total. Reactions to the film at the time of its release were mixed; Stephen King criticized the film due to its deviations from the novel. Critical opinion has become more favorable, with the film now widely considered one of the greatest and most influential horror films ever made and a staple of pop culture. In 2018, the film was selected for preservation in the United States National Film Registry by the Library of Congress as being "culturally, historically, or aesthetically significant".[7] Thirty-nine years later, a sequel, Doctor Sleep, was released on November 8, 2019.